Marbles have been made of round stones, clay balls, marble, porcelain, glass and steel. Toy makers have found increasingly ingeneous methods for making marbles that are beautiful, durable, inexpensive, and fun.

We are going to look at how the marbles have been made. Of course, we make marbles for play, so we'll look at how people have played with marbles and especially glass marbles.

The American Toy Marble Museum is located in Akron Ohio, where some of the earliest american glass marbles were produced. The American Marble and Toy Manufacturing Company was founded by Samuel C. Dyke in 1891 in Akron. The museum displays a wide range of unique and many glass marbles and other toys and tools from the industry. 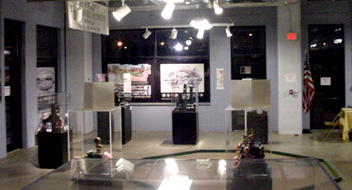 The Most Simple Toy

Archaeologists speculate that the small clay balls found in the pyramid tombs of Egyptian kings were produced for marble games. It is thought that the

Aztecs played a form of marbles, obviously not made of glass at the time. Clay marbles have been found in prehistoric pueblo ruins in the southwestern United States, in the classic periods Valley of Mexico ruins, and in the northern plains.

The British Museum in London displays marbles of clay, stone and flint that date back to ancient Roman and Egyptian civilizations. 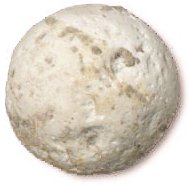 In Ancient Greece and Rome, children played games with round nuts, and Jewish children played games with filberts at Passorver. The Latin expression "relinguere nuces" - putting away childish things - probably refers to the polished nuts in these games. Although most early marble games were played with stone and nuts, some early Roman glass spheres have been found in Europe making them some of the first custom glass marbles. Whether they were intended for jewelry or served as children's' toys is not known.

A second century roman, Athenaeus writes of a game of marbles in which the suitors of Penelope in the Odysseey shot their alleys against another marble representing the queen. The first player to hit the queen glass  marble had another turn, and if he was successful again he was considered to be the probable bridegroom.

Glass marbles are thought to have been some of the many glass objects made in ninth century Venice, but it is not until the late middle ages that the playing of marbles games is again documented. It appears that by then glass marbles were known throughout Europe. A manuscript from the fifteenth century refers to 'little balls with which schoolboys played". In 1503 the town council of Nuremberg, Germany, limited the playing of marble games to a meadow outside of town.

The popularity of playing marbles in England during the Middle Ages is evidenced in the town council statues of the village of Saint Gall, which authorized the user of a cat-o-nin-tails on boys who played marbles

under the fish stand and refused to be warned off". A painting by Pieter Brueghel the Elder, "Children's Games" dated 1560 shows a scene of children playing glass marbles.

Archaeologists have discovered marbles in the ruins of homes from this period, including the home of protestant Martin Luther.

In 1720 Daniel Defoe, the author of Robinson Crusoe wrote of a marble player "so dexterous an artist at shooting the tittle alabaster globe.. that he seldom missed."

Toward the end of the nineteenth century American entrepreneurs began to vie for a share of the German-dominated marble industry. Early attempts to compete with Germain production of handmade glass marbles provided commercially unsuccessful.

James Leighton, who founded and worked for a variety of turn of the century glass marbles companies, developed a new tool, a mold on a pair of tongs. This tool made it possible to create custom glass marbles that had only one punty, the rough mark left on the glass when it was removed from a long steel rod called the punty. These glass marbles, today known as transitions, were a first step on the path top producing machine made glass marbles. They were made between 1896 and 1901.

Glass marbles as we know them today began in the mid 1800's when they were produced in quantities in Germany. The name marble originates with the type of stone that was once used to make the first marbles. White marble, alabaster marbles were the best playing pieces during the early 1800s. German hand production continued until the earliest forms of machine production began in the early 1900's. 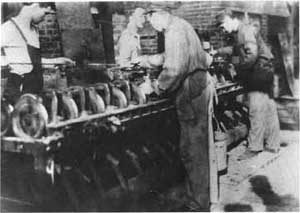 M.F. Christensen and Son – In 1900 Martin Frederick Christensen patented a machine that revolutionized the manufacture of steel ball bearings. Using the same principles, he went on to design a machine that would make balls from glass marbles. It took a team of two people to operate. When glass marbles were to consist of two or more colors, it was necessary to melt the glass in separate pots of color and then pour them into a third pot to be stirred. A worker would then gather some of the molten glass on a puny, allowing the glass to drip downward over each set of wheels. The other worker would use a tool to shear off the exact amount of glass to make the size glass marble being produced. Ten thousand glass marbles could be produced in a ten hour day. With this machine and the glass formulas he acquired from Leighton, Christensen established in Ohio the first company to manufacture machine made glass marbles.

Akro Agate Company – established in Akron Ohio in 1911, the Akro Agate Company originally packaged and sold glass marbles it purchased in bulk from M.F. Christensen and Son. By 1915, the company was making its own glass marbles at its glass marble works in West Virginia. Their significant contribution was the introduction of an automatic cutoff of hot glass, which further automated the machinery by eliminating hand gathering of glass.

The Golden Age of Glass Marbles

is referred to by collectors as the Golden Age of Glass Marbles. On gets a sense of how popular glass marbles were when one notes that West Virginia companies such as Master Marble, Vitro Agate, Alox Manufacturing and Champion Agate went into business and made a profit during a time in America when thousands of other businesses failed.

Sellers and Joseph Peltier learned glassmaking from their French immigrant father, Victor, who specialized in stained glass. When a fire destroyed their Novelty Glass Company factory, the two brothers rebuilt the glassworks and renamed it the Pelterier Glass Company. In the early 1920's,

such as Betty Boop and Any Gump. Today these marbles are known to collectors as comics. The Peltier Glass Marble Company is still manufacturing marbles in Ottawa Illinois.

The centuries old composition of glass used for handmade glass marbles, sand, soda ash and lime is the same basic glass used for machine made glass marbles. Other ingredients added include zinc oxide, aluminum hydrate, and various coloring agents. In the manufacturing process, the glass is melted in a large furnace to a temperature of 2,300 degrees Fahrenheit for up to twenty-eight hours, until it reaches the consistency of molasses. At this point, the molten batter pours through an opening in the furnace, where shears cut the glass into equal pieces. These pieces move through rollers and cool rapidly, hardening into glass marbles as they are transported. They then drop into metal containers for for a slow cool called annealing. Once cooled, the glass marbles are inspected, sorted, and packaged for sale.

Glass marbles still appeal to people of all ages. Kids and adults love to play, collect and trade the amazing and ever so mind altering glass marble. So long as glass marbles have this natural appeal, there will be glass marble makers. Custom glass marbles are still produced in vast quantities by several marble manufacturers. There are also a large number of artist, hobbyists, and glass shops who produce fine art glass marbles.