We all have that one friend, you know the type: a stoner with a decent collection of glass, nice pieces, a few that you wish you had yourself, but this person  never changes the water in their rigs. It looks like the Swamps of Dagobah in those rigs and smells twice as bad. The water is black, there's a film on the surface of the water, and there's huge chunks of reclaim bobbing around in there like turtles in the Everglades. Sounds disgusting right? Well it is, and not only is it disgusting but there's a good chance that the bong water could carry microbes that you do not want anywhere near your mouth, and you definitely don't want to filter smoke or vapor through that water if you intend to breathe it into your lungs. Beyond this, there's the matter of pipes and resin and all the headaches that come along with it. That resin in your pipe can have a significant impact on your enjoyment of cannabis; sometimes you won't even realize that you're tasting more of the resin in your pipe than your precious, delicious flower. Cannabis is best enjoyed through glass that is as clean as possible, but cleaning can take a lot off effort and cleaning after every use may not necessarily be the most efficient method and may be an unnecessary expenditure of cleaning solution. So how often should you clean your glass in order to maximize enjoyment and minimize time and effort spent cleaning?

That's a tough question to answer, and honestly it really depends on personal preference. If you don't mind spending money on rubbing alcohol or specially formulated cleaning solutions and you like to get the cleanest hits possible then you might prefer to clean your pieces after every use. This could have its own benefits because it would require less cleaning solution in an individual cleaning session to achieve a baseline of cleanliness, but it would necessitate more cleaning sessions and more overall time and effort.

On the opposite end of the spectrum would be people who prefer to wait until they simply cannot tolerate the dirtiness of their glass before cleaning (we won't talk about your friend from the first paragraph who likely hasn't cleaned their glass since they bought it, don't be that person). These people might wait a few weeks or months before cleaning their pieces, depending on how often they use them, but their cleaning sessions will be much longer and labor-intensive, sometimes requiring multiple washes with cleaning solution and manual scrubbing with swabs and picks. Though the individual session is more labor-intensive, you spend a lot less time cleaning overall with this method, and might even conserve a bit of cleaning solution in the process. 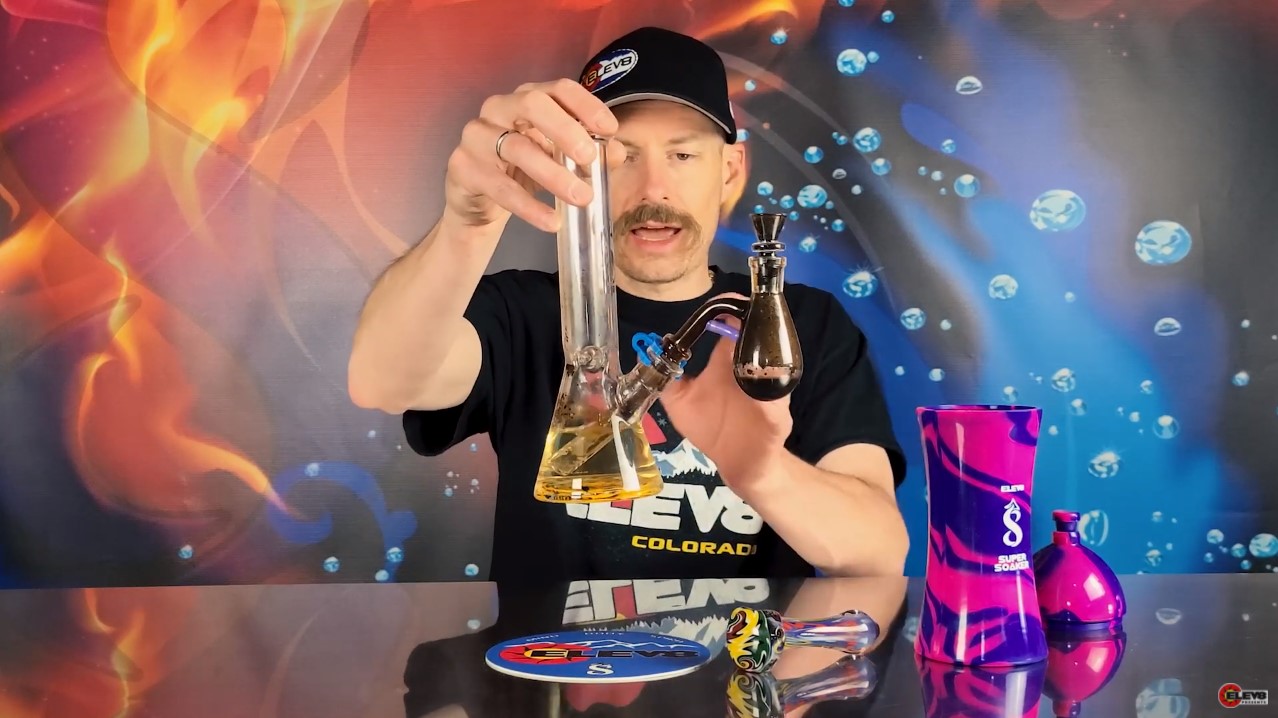 The water in a water pipe, rig, bong, or water filter is an entirely different issue. Water is one of the essential compounds for life on Earth, and as such there is likely life growing in your bong water if it's been sitting around for more than a day or two. Remember that weird film floating on the surface of the water in those rigs that your hypothetical friend owned in the first paragraph? That's called biofilm, and it's a network of microbial lifeforms like bacteria, fungus, mold, and mildew. Airborne microbes can and will find their way into your rig and will settle on the surface and begin to colonize the surface of the water. Fungal spores, mold spores, and mildew spores can all become airborne and when they find water they can begin to "sporulate" within 24-48 hours according to the U.S. Federal Emergency Management Agency. As the mold, fungus, or mildew begins to bloom on the water it will produce its own spores which can become airborne again, and they will likely go straight into your mouth and lungs when you hit your rig. It's for this reason that we recommend that cannabis users should change their bong water every 48 hours at the very least to avoid exposure to potentially harmful fungus.

Bacteria is another concern in bong water, and though water-borne bacteria are less likely to become airborne, they are responsible for much of the pungent odor that we commonly associate with bong water and bacterial presence in bong water could make you incredibly sick if you made the ill-informed decision to drink the bong water, as some urban myths would encourage you to do. Bacteria cannot live on water alone, they require some sort of organic material to consume as a source of energy, and that's exactly what you're giving them every time you filter smoke or vapor through your rig. The bacteria consume this organic material and excrete all sorts of nasty compounds that emit foul odors and could also potentially get you sick. So don't drink bong water, and remember to change it at least once every 48 hours to avoid fungal growth in your rig.

Beyond these essential health recommendations, the periodical removal of residues like reclaim and resin are not necessarily a matter of health but more of preference and flavor, though the compounds that could result from accidentally burning these residues could be a health concern. Resin and reclaim stink, and burning resin emits a lot of the same compounds that you would find in the smoke that emits from burning latex rubber. The smell of resin smoke resembles the smell of a burning car tire due to the presence of these compounds, and those compounds are nothing that you should ever want to inhale. It's for this reason that many cannabis users stick to a routine cleaning schedule, though the frequency and intensity of a cleaning session often varies from user to user. Everybody uses cannabis in different amounts, forms, and rates, and its for this reason that each user really just needs to gauge how often they should clean for themselves. Experiment with different methods: try cleaning after every use, maybe just once a week, or maybe even just once a month or every few months. You will likely fall into a schedule that works for you and your personal relationship with cannabis and your glass. 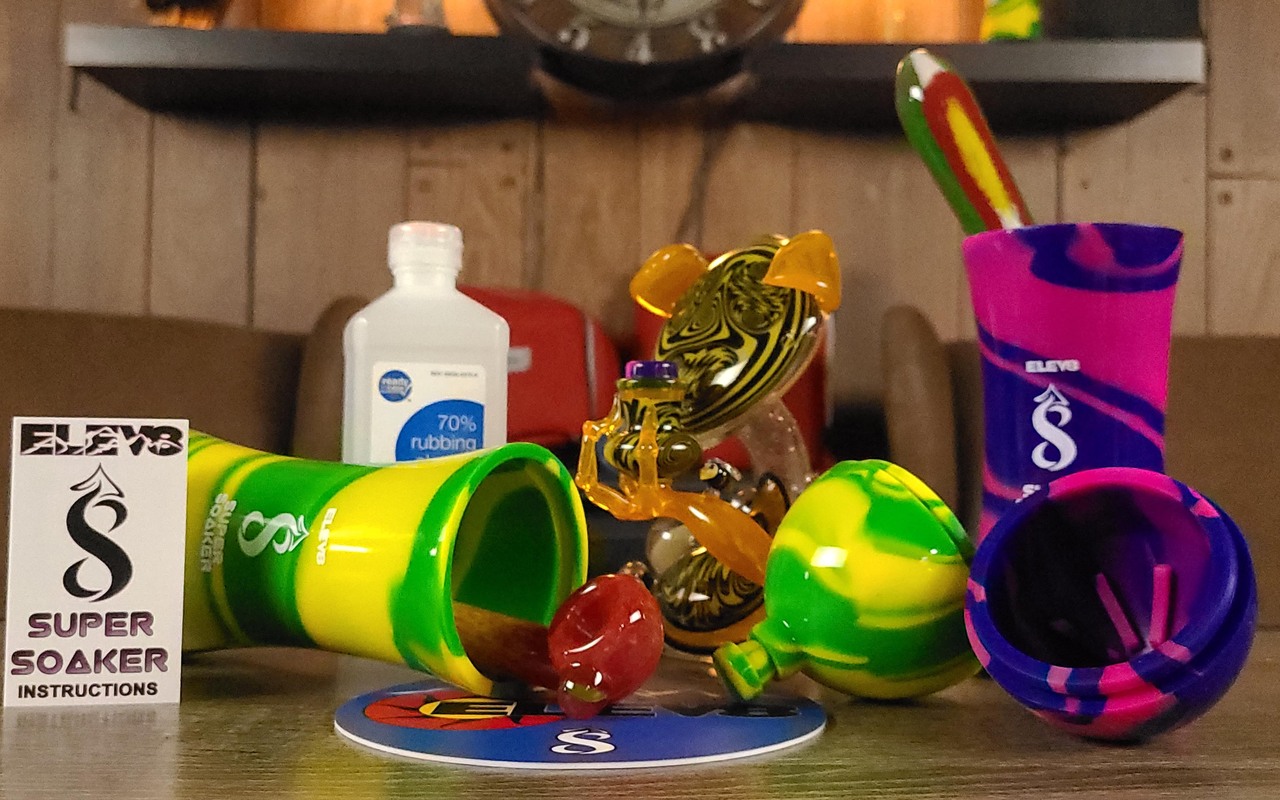 To help answer this question, we talked to some of the employees at our Elev8 Distribution warehouse in Colorado Springs about their own glass cleaning habits. Many of our employees are regular cannabis users themselves, and they had a bit of personal experience to share. Shipping Associate and Customer Service Representative Brandy said that she cleans her bong with isopropyl alcohol roughly once a week, and advises users to clean their bangers and nails with Tidy Tips after every single hit which is a habit that can save you from needing to do a lot more cleaning in the long run. Director of Wholesale Distribution Sam Vapes employs a similar method, cleaning rigs and pieces roughly once a week with rubbing alcohol which he keeps in a Super Soaker Cleaning Container. Sam pours the alcohol into his rig, caps the joint with the silicone cap from the Super Soaker, shakes the rig up and then pours the alcohol back into the Super Soaker. Shipping Manager Brian also uses a Super Soaker full of isopropyl alcohol which he reuses for multiple pieces until the alcohol becomes saturated. Production Manager Chris, always a bit of a black sheep in the family, never cleans his glass pipes, preferring instead to own cheap pipes which he can throw away and easily replace when it becomes too dirty to use. Chris also offered a bit of advice: "...people will actually take their pipe and stick it in a pot of boiling water on the stove and boil out all the resin. That really stinks and it's disgusting but it works."  Production Associate Caleb cleans his rigs and bongs roughly every three days with rubbing alcohol and salt, sometimes gently warming the solution with a flame-free warmer like a hot plate.

The cleaning of cannabis glass is a surprisingly complicated issue and so much of it falls on personal preference, but there are health concerns that should also be taken into consideration, and it's for this reason that we advise sticking to a regular cleaning schedule that works for you, and always remember to change bong water and rig water at least once every 48 hours. Having clean glass to smoke or vape from is always a nice thing, and you owe it to yourself and your cannabis experience to ensure that your glass is clean to elevate your enjoyment of cannabis to its highest potential.