We talked to legendary glass artist Eli Mazet about his life's work and the contributions he has made to the glass industry throughout the years. Mazet has an infectiously positive energy and a boundless imagination to match, and our interview touched on a wide range of topics which fascinate him. Collectively Eli and his brothers are known as the Mazet Brothers, and they operate a studio known as Mazet Studio in Eugene, Oregon. In 1997 Eli's older brother was a pottery teacher in Eugene, and as more schools cut funding to their arts programs the elder Mazet brother found himself without a job, eventually securing a position at one of the nation's first major bong companies. When Eli Mazet would watch his older brother work with glass his imagination would run wild with the possibilities of what he could potentially make; this was a medium that could allow Eli Mazet to take the ideas from his mind and materialize them in the real world. Eli also recognized that glassblowing could be a powerful way to sell art and make an independent living for himself. So Eli Mazet tried his hand at glassblowing and quickly realized that it was much more difficult than he had initially anticipated. However, Eli was ready to rise to the challenge, and he emotionally reminisced with us about the process of learning the medium and how it conversely taught him a deeper understanding of what it takes to be a great artist. 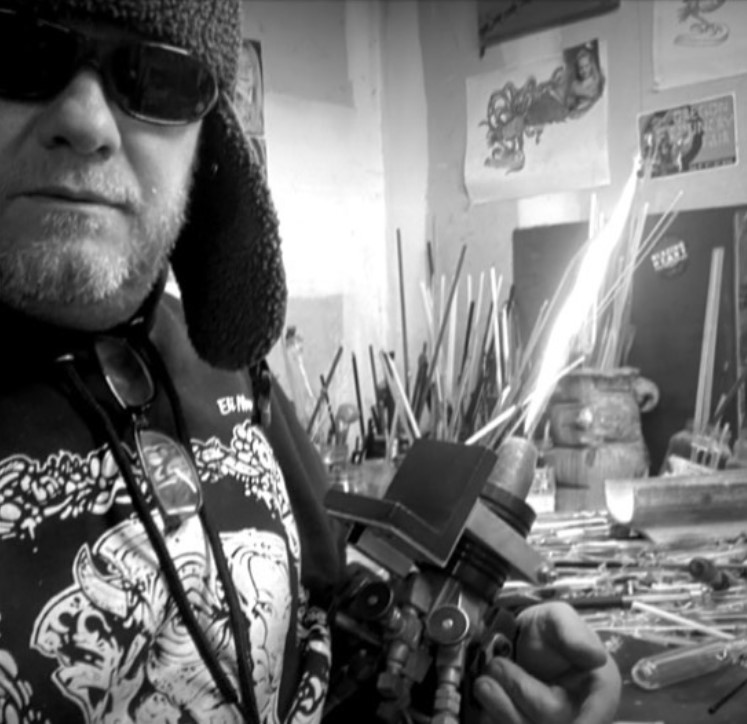 There is no doubt that Eli Mazet is a great artist, and the impact that glass made on his life can only be compared to the impact that his life has made on the glass industry. As Eli Mazet is wont to say, "I shaped the glass and then the glass shaped me." While many trades and crafts can be mastered, glassblowing is a unique blend of chemistry and art with endless possibilities and iterations, and Eli Mazet believes that glassblowing can never truly be mastered. So Eli Mazet spent much of his career finding niches that could be filled, and stepping into those roles to differentiate himself from the pack. When all of his friends were selling weed to make money in the late 90's, Eli Mazet saw a need for a glass pipe maker in his local community and stepped into that role. When he was first learning to blow glass, Eli Mazet purchased a book called "Glassblowing: An Introduction to Solid and Blown Glass" by Homer Hoyt, a scientific glassblower who worked for NASA, and he credits this book with much of his early success. He learned so much from Hoyt's book that when copies started to become more scarce, Eli Mazet obtained the distribution rights for the book and became its distributor, again stepping into a niche role and preserving an important document in glassblowing history so that it can continue to be made available for generations to come. When Eli Mazet saw that there was a potential niche for custom shot glasses, he stepped into that role and became the most famous shot glass maker in the United States, and when he learned why glassblowers stopped making hand-blown shot glasses he stepped into the role of author to get this untold story out to the public and the industry at large. 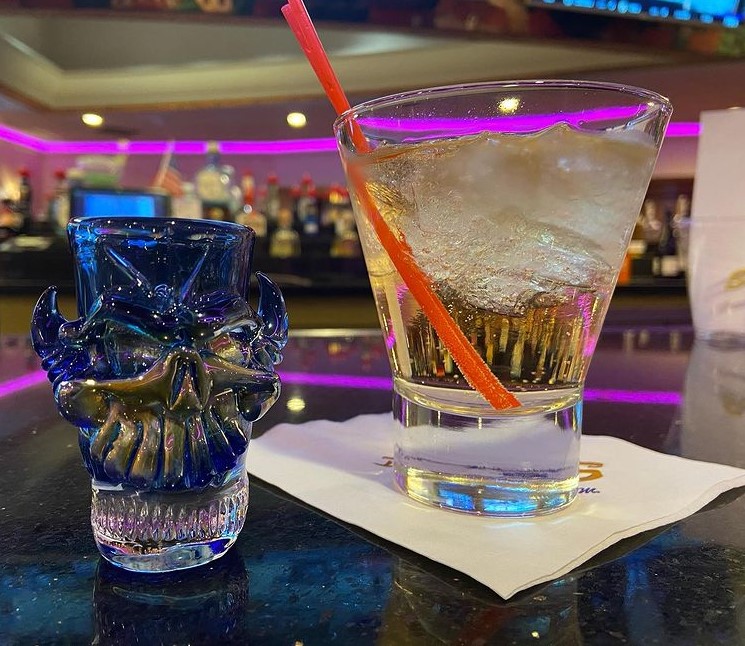 Eli Mazet, through serendipitous circumstance, found himself at the right place and at exactly the right time; Eugene, Oregon in the late 1990's was a fertile cradle for the cannabis glass industry in its early infancy. Legendary glassblowers like Bob Snodgrass came from this area, and the region continues to produce exceptional glassblowers to this day. Snodgrass lived just a few blocks away from Eli Mazet when he was first learning to blow glass, so Mazet was fortunate to be able to interact with such artists and learn from them. Eli Mazet stumbled into his characteristic style quite coincidentally as well; during a time when he was forced to live with his girlfriend's parents he had to step away from cannabis glass because of the parents' disapproval. Mazet was working from Homer Hoyt's book and found a design for a glass seahorse which he replicated en masse, selling the entire batch to a shop who snatched them up immediately. Eli Mazet then began making all sorts of glass animals and characters which he would eventually incorporate into cannabis glass for years to come. 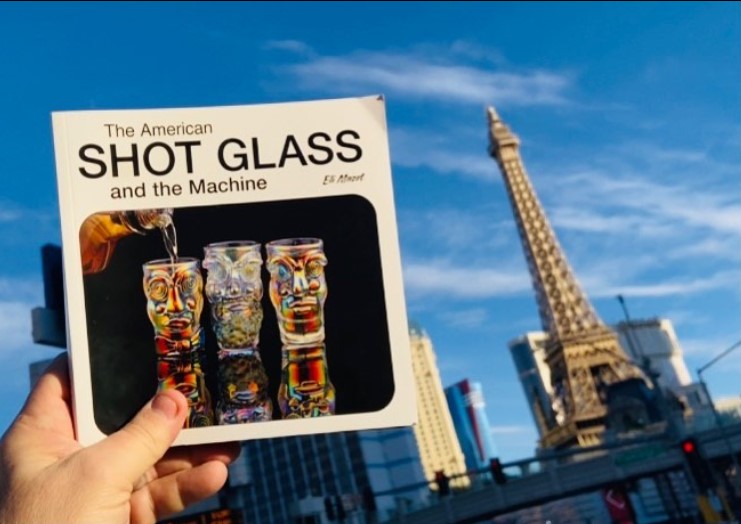 One of the keys to Eli Mazet's continuing success was his ability to find untapped markets, and his glass animals gave him outlets for his work that would have been otherwise closed to a blower who strictly makes cannabis glass. In his own words, "there's more Christians than pot smokers." Adapting this work to cannabis glass again put him into a unique market since he was one of the first glass blowers to utilize sculptural glass techniques to make pipes that looked like animals or characters. He later recognized that there was an absence of artistic shot glasses in the industry and would go on to make them his signature product.

Eli Mazet worked with dozens of legendary glass artists to make the first major collection of hand-blown shot glasses and wrote a book about the process titled "The Contemporary Shot Glass". As Eli learned more about these characteristically American pieces of glassware he uncovered a story that had never been told about the American glassblowing industry that explained so much of why hand-blown shot glasses almost disappeared entirely from the glass industry; it's a fascinating story which Eli Mazet uncovered in his book "The American Shot Glass and the Machine", and if you want to learn more we strongly recommend that you pick up a copy over at his website.

In the future Eli Mazet plans to focus more on artistic work and less on production, and he wants to do more collaborations and make more media content as this is an aspect of his life and career which Eli really enjoys. Eli Mazet has made commercials for major glassblowers and studios in the industry, worked on a major documentary about Bob Snodgrass called "Degenerate Art: The Art and Culture of Glass Pipes", and he produced a documentary film called "Pipetown USA" about the glassblowing industry in Eugene, Oregon which you can find  over at the website for the film. He recently started a Facebook group for glassblowers and glass enthusiasts called GlassPod and encourages anyone that wishes to learn more to join the group. You can go check out more of Eli Mazet's work over at his Instagram page (@elimazet). 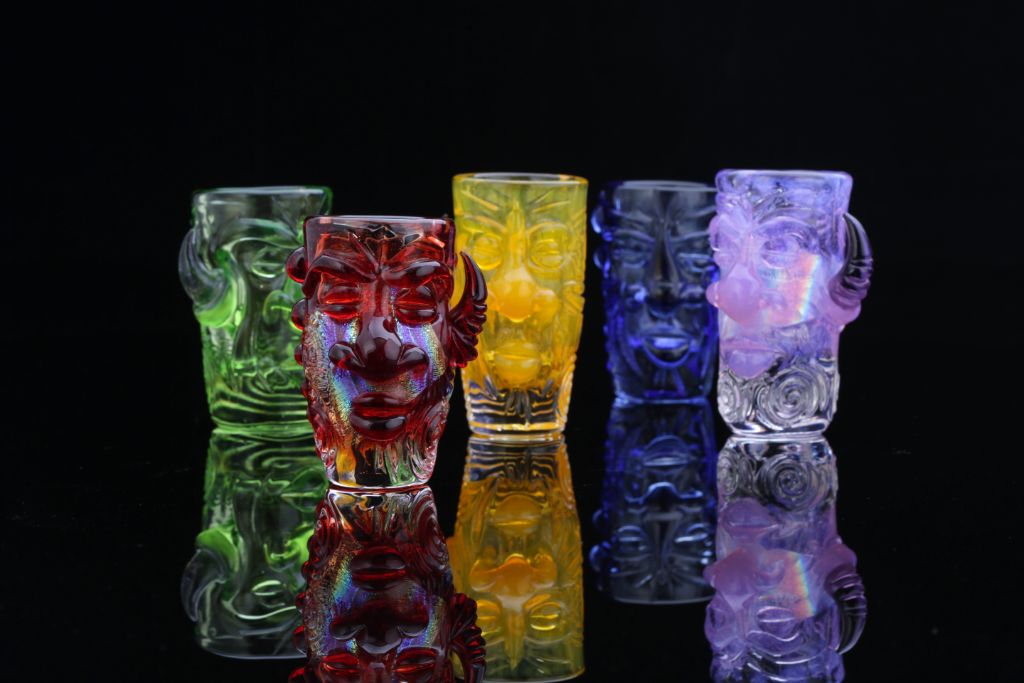 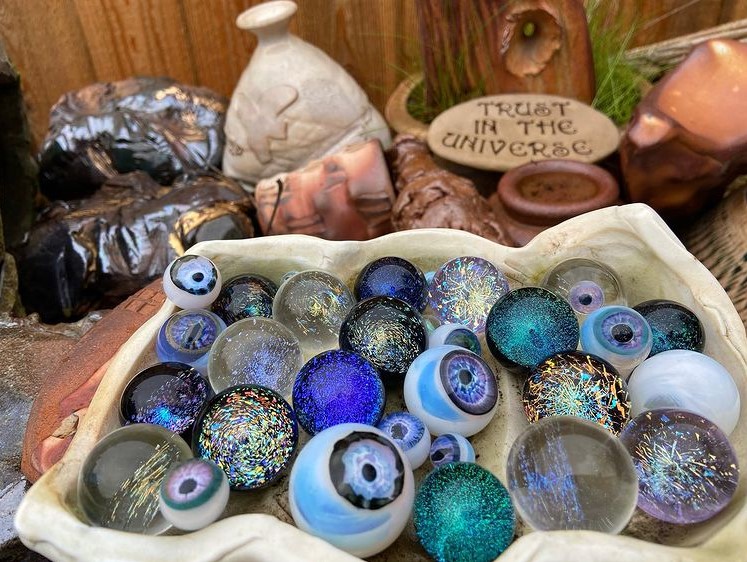 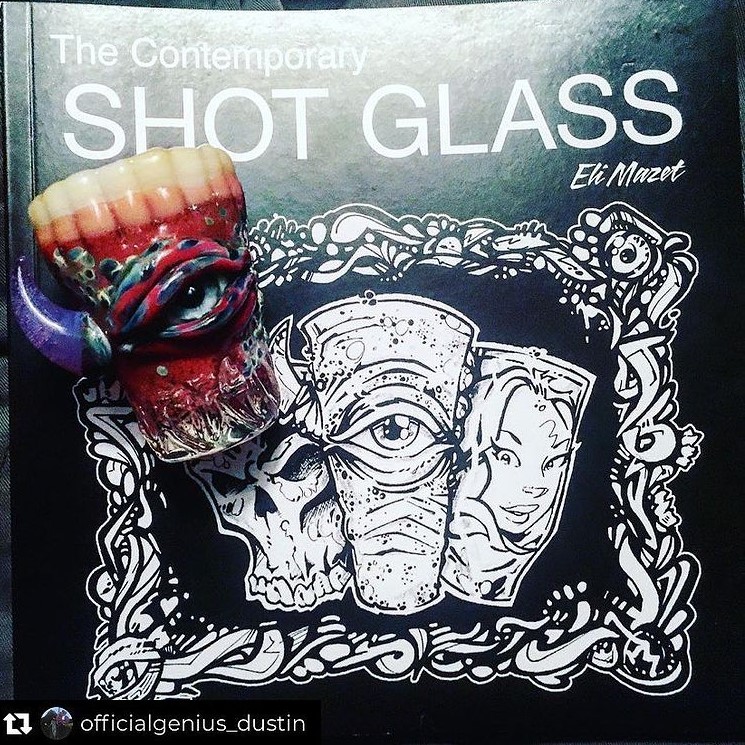 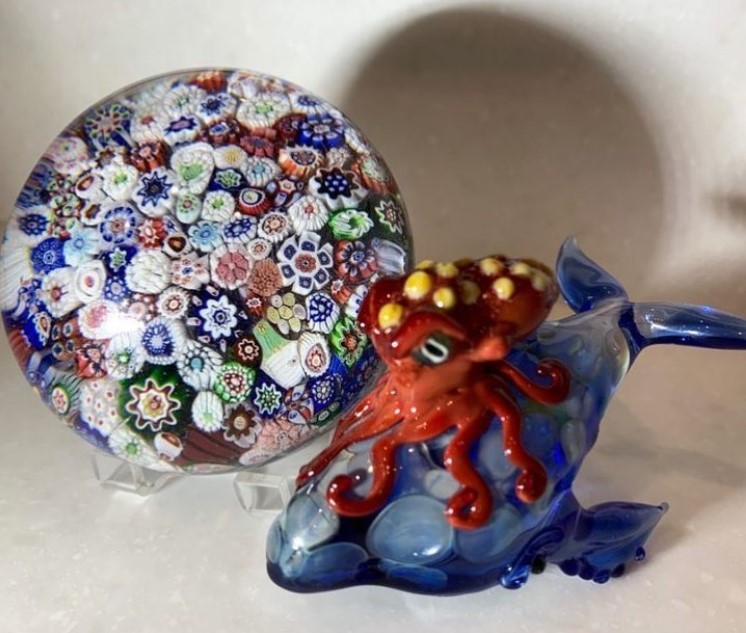 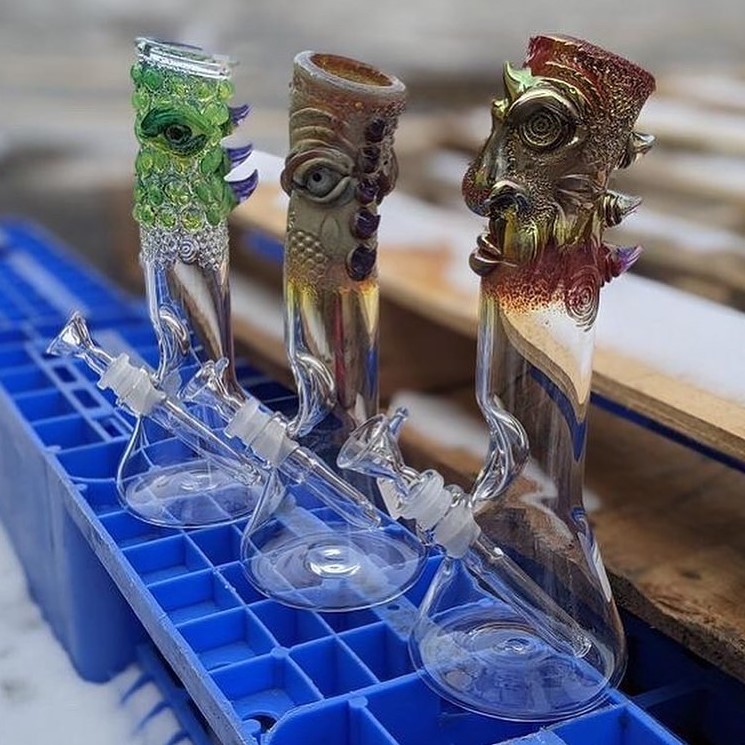 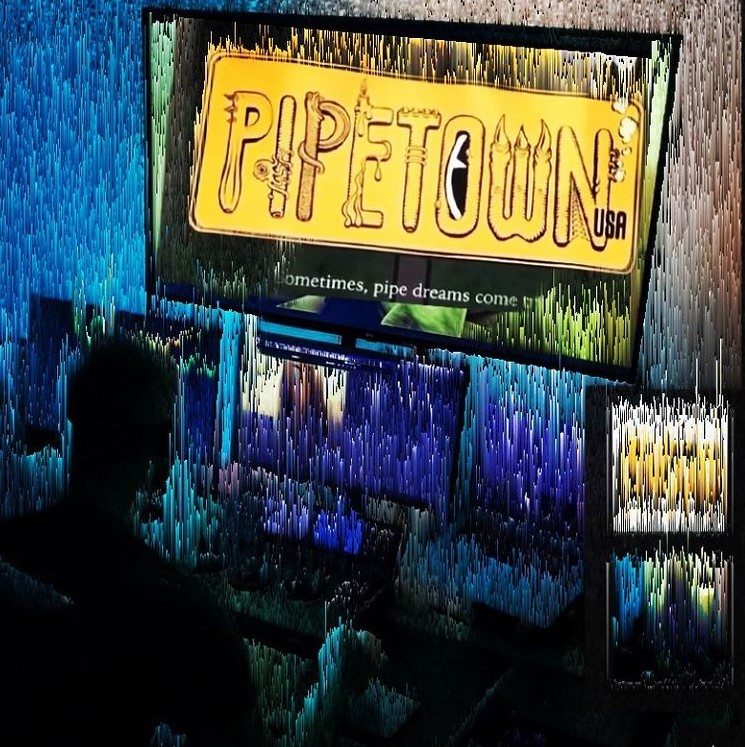 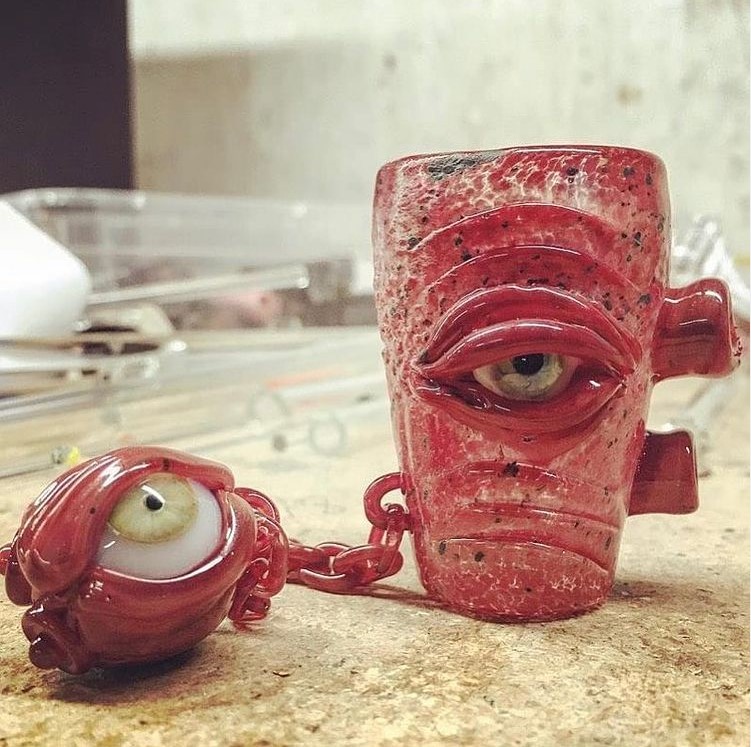